As part of my trip to Japan, one thing I wanted to experience was a tea ceremony! Luck would have it that last Sunday in Wazuka, the town Kyoto Obubu Tea Farms is located in, had one! This will actually be part one of my three part mini-series on matcha.

Matcha has become a fan favourite and I know that every time I post about it, everyone seems to enjoy them. Therefore, this post will focus on my experience with a tea ceremony, then followed by tools and making matcha, and the last post will be about the tea itself.

The Town of Wazuka produces around 23% of all matcha in Japan. Therefore, I couldn’t think of a more appropriate place to talk about Matcha than here; matcha central!

With that being said, let’s go!

The goal of the yearly tea ceremony event is to bring awareness and to break down the ceremony to residents in Wazuka. This is the third year it has been held. I was pretty excited because it meant that I didn’t have to travel far to experience one!

The event was around an hour long and was broken down into two parts: a Nodate tea ceremony and then followed by a lesson on breaking down parts of the ceremony so we could have hands-on experience.

I was really lucky that Simona-san, one of the staff members at Obubu, was actually at the event. She was the one who told me about it, and in the end, translated for me! What I didn’t know at the time was that she was actually the one demonstrating the tea ceremony as well!

The type of tea ceremony is called a “nodate.” From my understanding, it is a much newer format, which generally takes place outside and is much shorter. The demonstration was around 15 minutes long.

Tea ceremonies, which have Zen roots, are generally guided by four main core values: harmony, respect, purity, and tranquillity. This is paired with the idea of “Ichi Go Ichi E” which means ‘one life one chance.’ This is to encourage the idea of cherishing the moment. There are many other details to the tea ceremonies, but for this post, I want to keep it to the barebones.

During the ceremony, the guests were given sweets or wagashi. This one was in the shape of a sakura, which is a common motif in the springtime. The sweet is meant to be eaten before the matcha is served. This is to help prepare your palate for the matcha. You use the youji (stick) to cut and eat it. After the matcha was whisked, we were all given a bowl to drink.

To make sure that I fully captured what had happened during the demonstration, I asked Simona-san to explain:

After the farewell greetings, we were on our way to the lesson!

In our lesson portion, we were given a chance to try “Obon Temae,” which is a ceremony done in a tray. I actually think this looks really pretty, so I was excited to try it. Full disclaimer, my Japanese is poor at best. So, luckily, Simona-san stuck close by and translated what the teacher was saying. That helped a lot, since I would have been very lost without it!

Many of the parts of tea ceremony are about showing respect to the guest, therefore many of the steps are about cleaning the utensils. There were a few things I never noticed/knew about tea ceremonies:

A: Some movements are very difficult to do. Since it is a performance, many of the movements are meant to look good for the audience, which means at times placing the arms/hands at an awkward or uncomfortable angle

B: I didn’t know how specific some of the locations of the items were. Each part of the ceremony is really telegraphed. I can see why it would take years of practice to master something like this.

C: Folding the fukusa is harder than it looks (see below)

D: For your last sip of matcha, you are supposed to give a large ‘slurp’ to show you enjoyed the matcha. I think the concept also applies to noodles

Overall, I am really glad I got to go. I think what made me appreciate the tea ceremony more is when I had to do portions of it myself and I was able to truly understood how complicated it was. While the actions look fluid, having now tried them myself, I can understand why it requires so much dedication to master.

Below, I found a video of an Obon Temae, which takes place in Kyoto. I thought a video may better help explain the ceremony. Enjoy!

Would you ever take part in a tea ceremony? 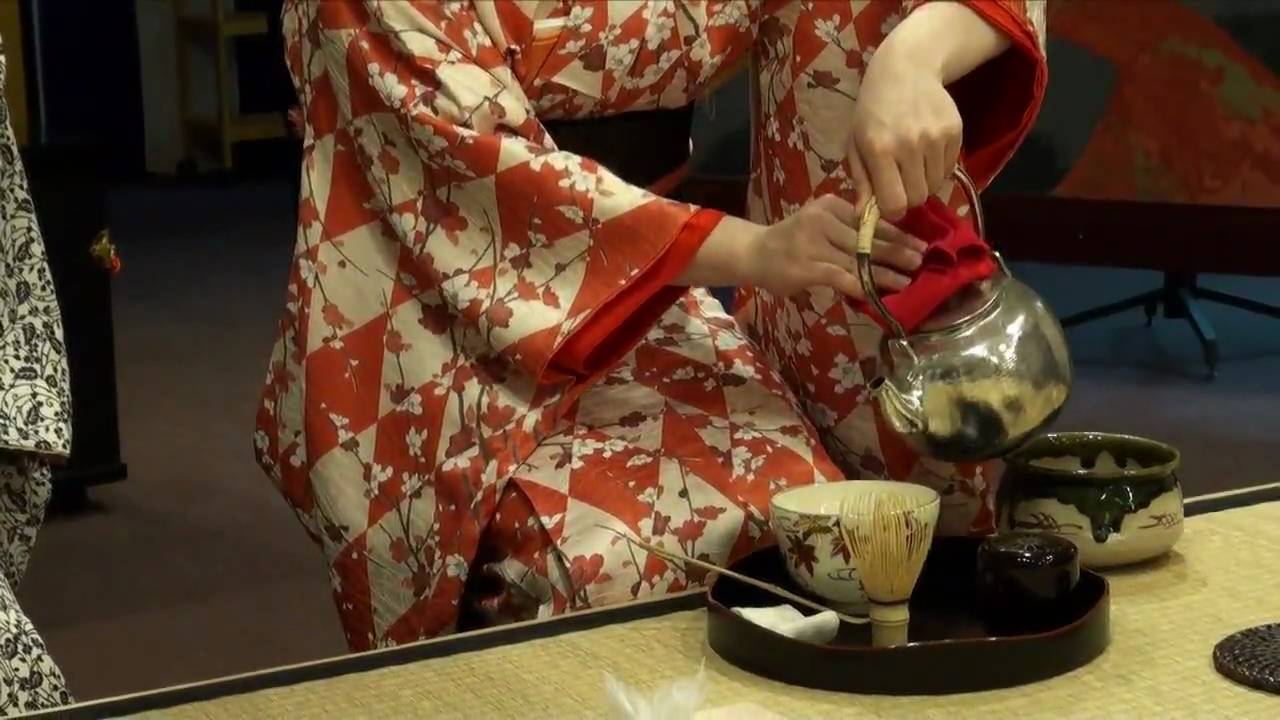 […] week, I had a chance to see a tea ceremony and try portions of it out! This week, I thought that it would be interesting follow that post up with the teaware used during […]

[…] I had time off, I had the opportunity to participate in chakabuki events, a nodate tea ceremony, and to visit tea shops and attend a tea ceremony in Kyoto. During my last week in Japan, I […]

So informative. I loved that you gave so much information about the tea ceremony itself!

I’m glad you enjoyed it! Thank you for reading! 🙂

[…] to make Usucha as I have been lucky enough to learn the basics of the tea ceremony while I was in Japan. I used a chasen (“tea whisk”) and chawan (“tea bowl”) to make the tea. The […]

[…] you would like to learn more about matcha, I have a three part series about matcha relating to the Obon Temae tea ceremony (picture above), utensils needed for Obon Temae ceremony, and an overview of matcha! It has been […]

Tea in Spoons is where I share my love of teas through tea reviews, tea travel, tea tips, information, and more. New tea adventure every Thursday!